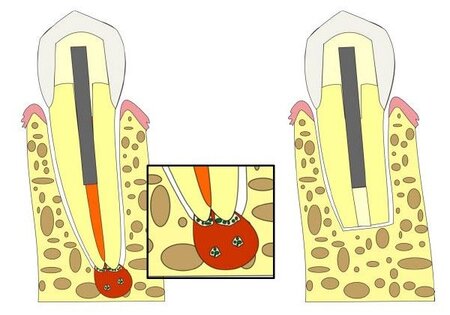 Apical periodontitis is an inflammatory reaction in the periapical tissues caused by microorganisms of endodontic origin and their by-products. Primary apical periodontitis is treated by root canal treatment, performed under strict infection control, using antiseptic measures, followed by root canal filling and closure of the tooth with a sealing restoration. In some cases the primary treatment is unsuccessful and the disease may persist. The causes of an unsuccessful treatment may include untreated root canal anatomy, insufficient irrigation, inadequate instrumentation, incomplete filling of the root canal system, or a combination of these. However, even if all the procedural steps are followed, intra-radicular microorganisms may still persist and survive in inaccessible ramifications and anastomoses of the main and accessory canals, and within the dentinal tubules.

Failure of primary root canal treatment may be addressed via a non-surgical (conventional retreatment) or a surgical approach (apical surgery), as well as by tooth extraction.

Studies were heterogeneous with an overall high or moderate risk of bias. The main flaws included; the randomization process was not described, blinding of patients and personal data was not possible, and/or the baseline characteristics of the patients in both groups were different, among others.

The findings indicated that apical surgery resulted in better results regarding periapical healing (82.9% versus 71.7%) and a reduced need for further intervention (7.1% versus 18.31%). Regarding tooth survival, a higher survival rate was detected in the non-surgical treatment group (88.19% versus 84.04%). However, it should be noted that the inclusion criteria for the surgical and non-surgical groups differed, as the non-surgical group included teeth with both primary and secondary apical periodontitis, whereas only teeth with secondary infection were included in the apical surgery group.

Notably, several of the critical outcomes intended to be analyzed in the systematic review, such as pain, tenderness, swelling, need for medication, presence of sinus tract, satisfactory soft-tissue healing and tooth mobility were not reported by any of the included studies. Future clinical trials comparing both procedures should measure these outcomes.

As a result, all the review findings should be taken with caution, as they are mostly based on studies with a high risk of bias.

Controlled clinical trials comparing the clinical and patient-related outcomes of apical surgery and conventional endodontic treatment are still needed and should be conducted and reported according to consolidated standards like the CONSORT statement (Moher et al., 2010).